In this Speculative Design project, I worked out the scenario of a “Great Plant Extinction”. In a scenario devised for 2018, I let all plants die from a germ and developed the idea for the fictitious, synthetic food "SynthNutri", which is distributed by SynthNutri-Laboratories - a dominant global company that supplies the entire western world with food.
In order to put the synthetic food product "SynthNutri" into context, I had launched an exhibition that was intended to give the fictional resident of the biosphere cities existing in 2118 a retrospective look at the history of plant extinction and the company SynthNutri Laboratories the past.
The final exhibition included a company portrait with information on food, a timeline with important events from the past 100 years with exhibits and a section with collages to illustrate everything.
The exhibition was intended to leave contemporary visitors with the worrying thought of what it would be like to live in such a barren and unattractive world and how dangerous and drastic the loss of nature would be for people. 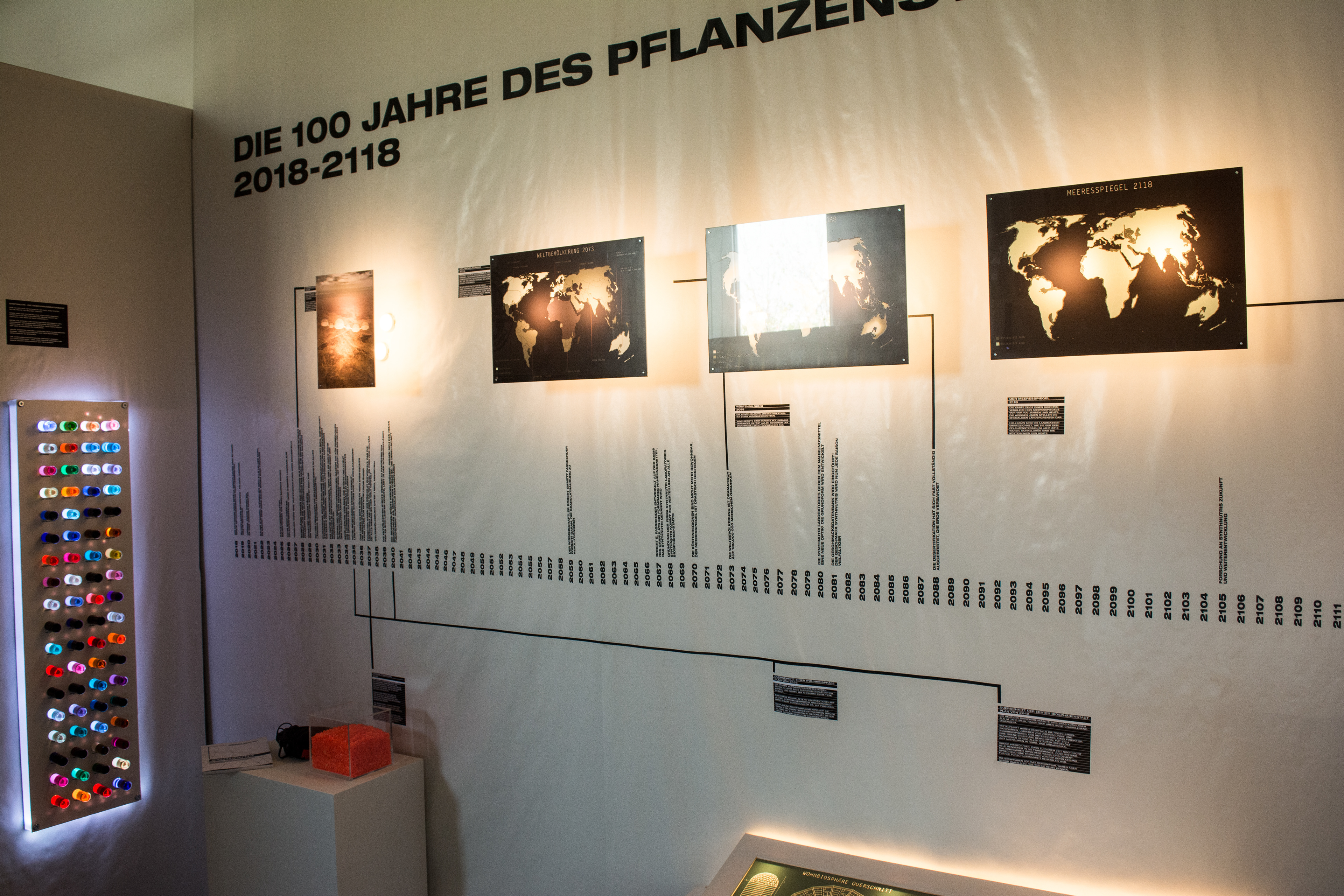 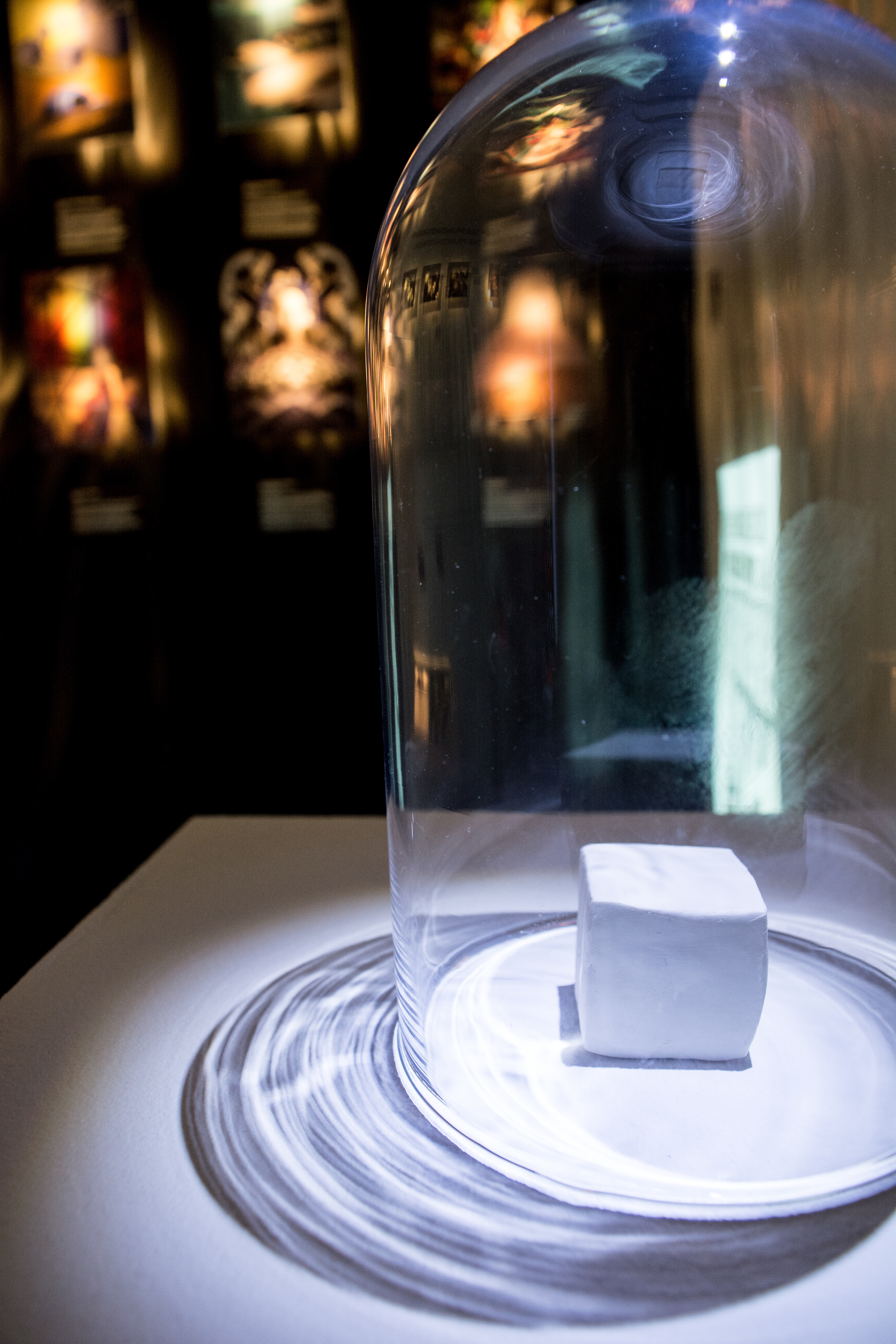 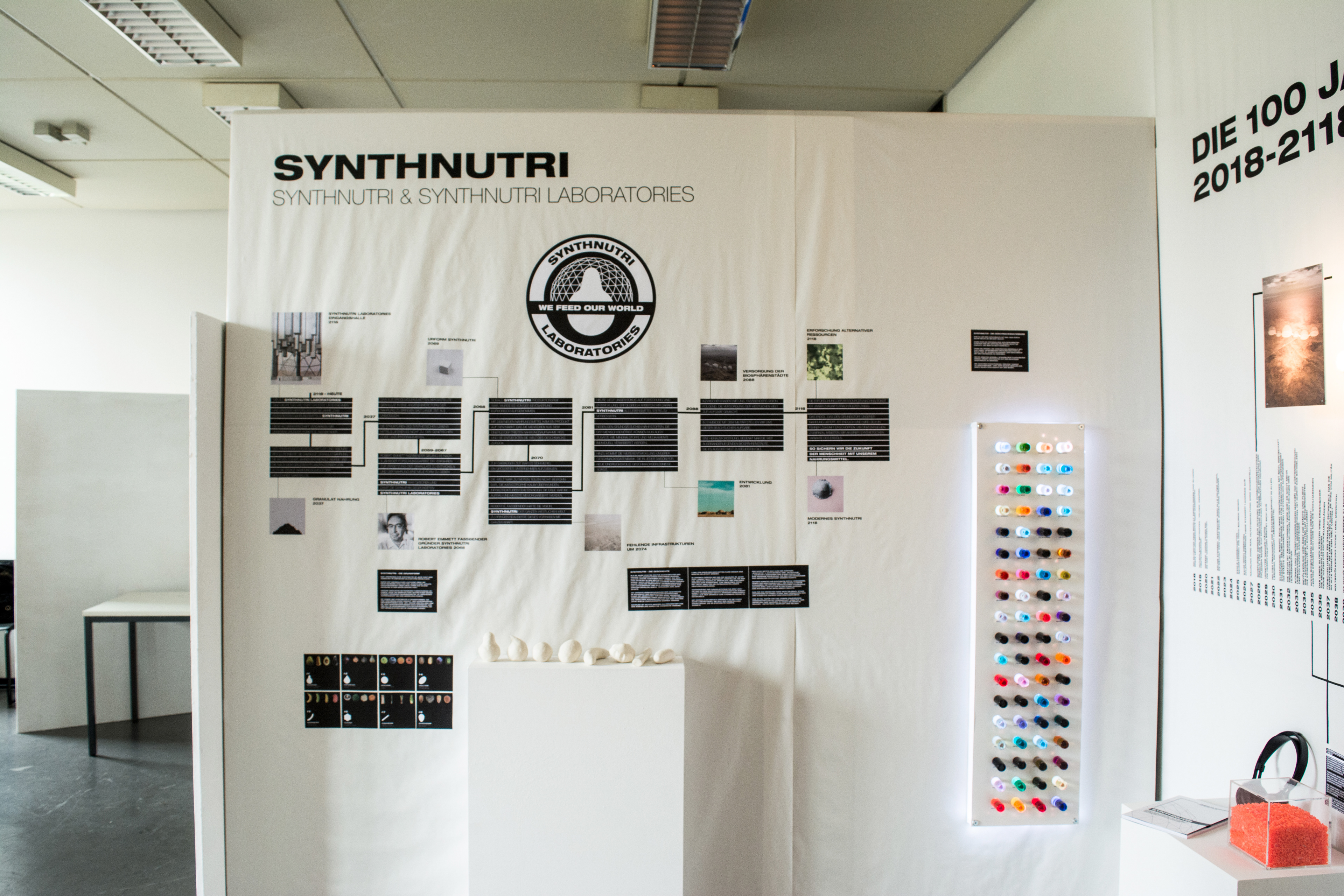 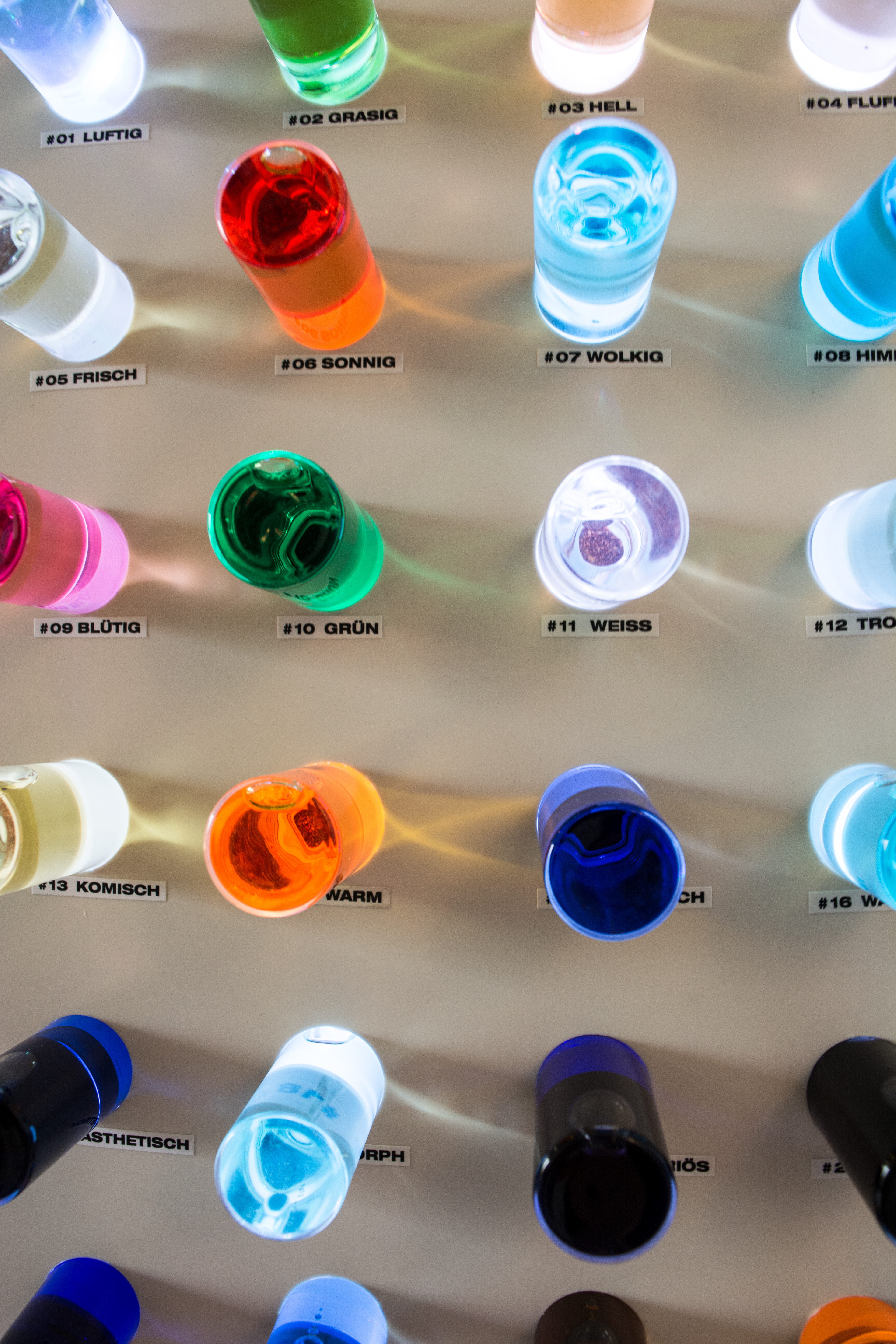 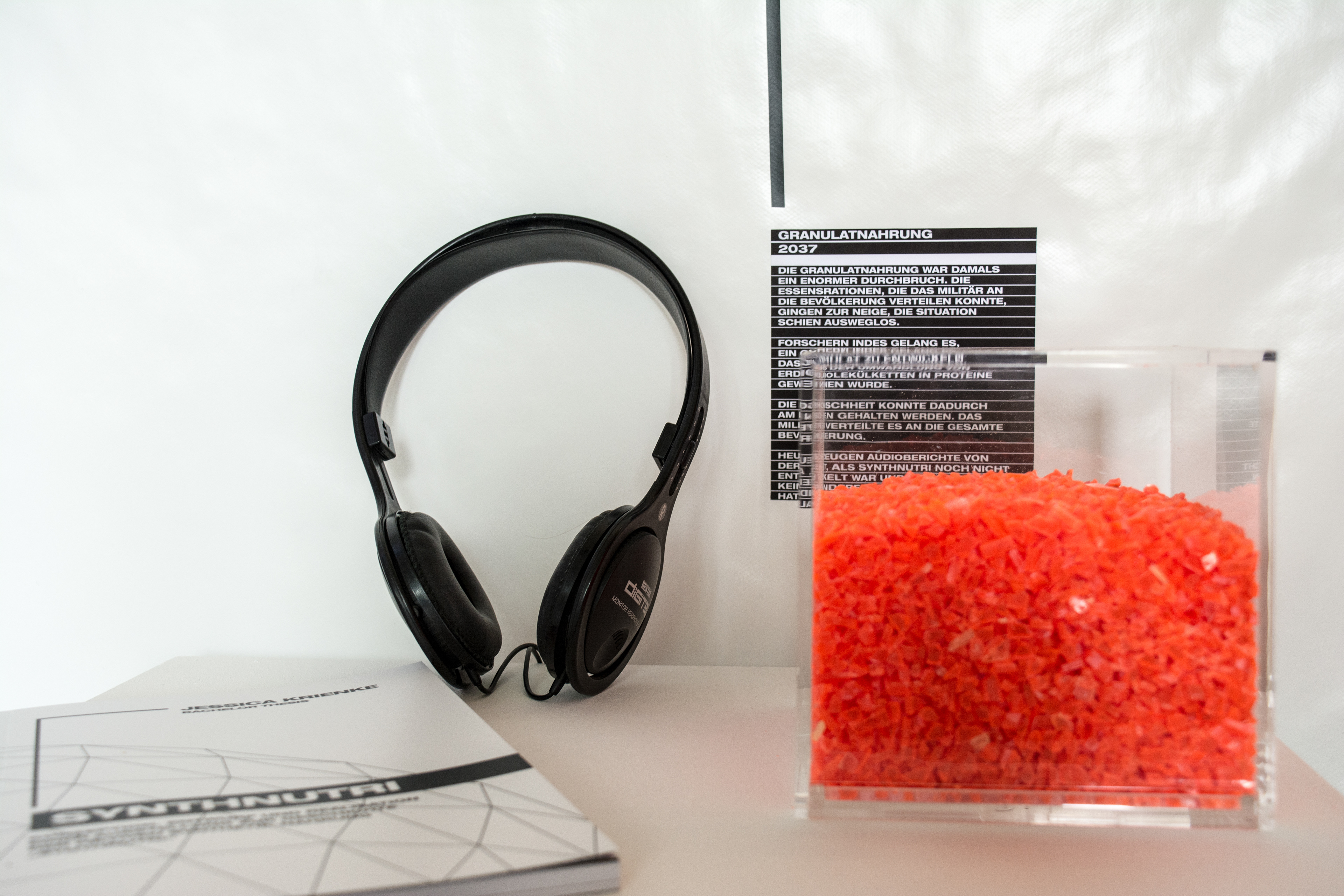 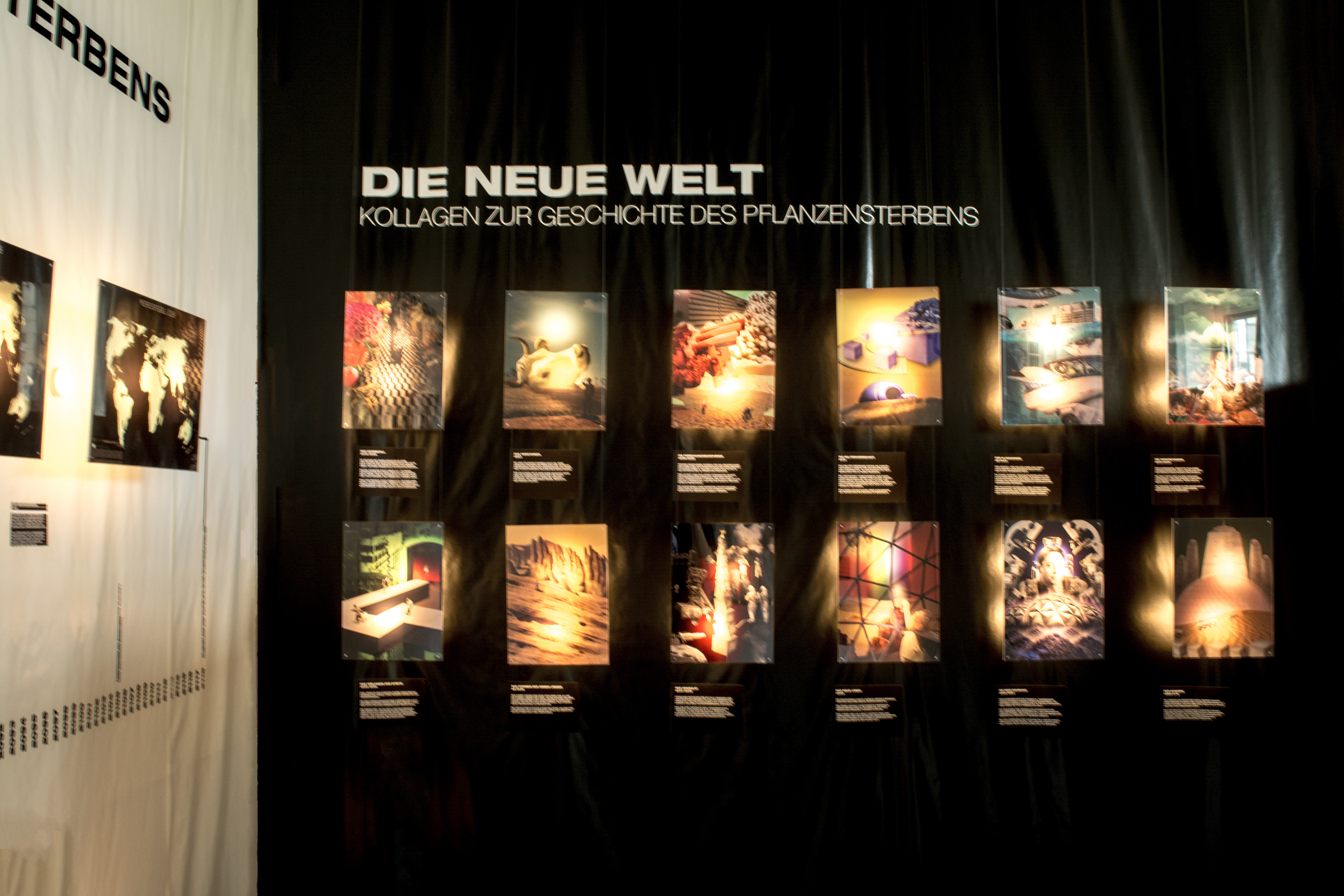 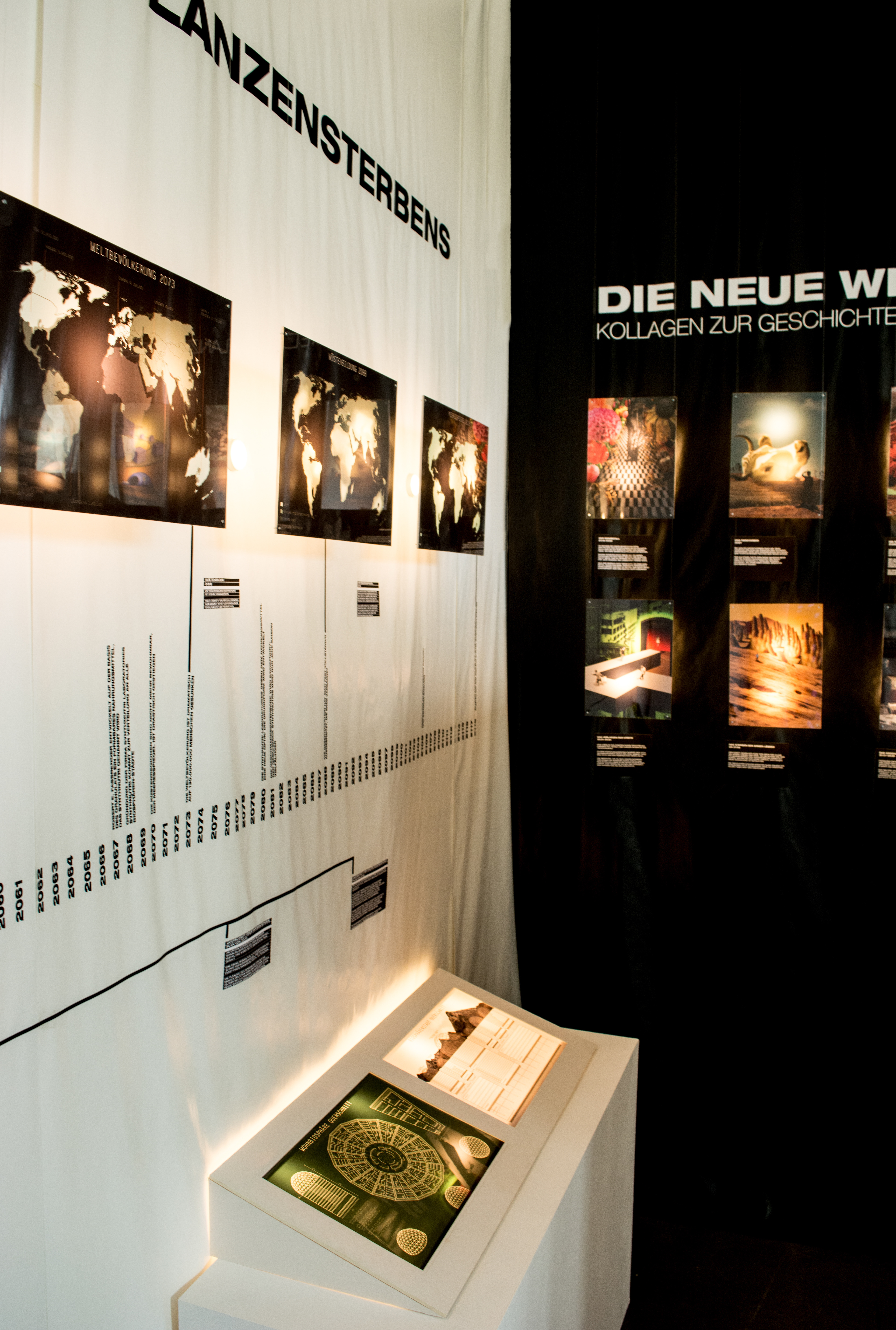 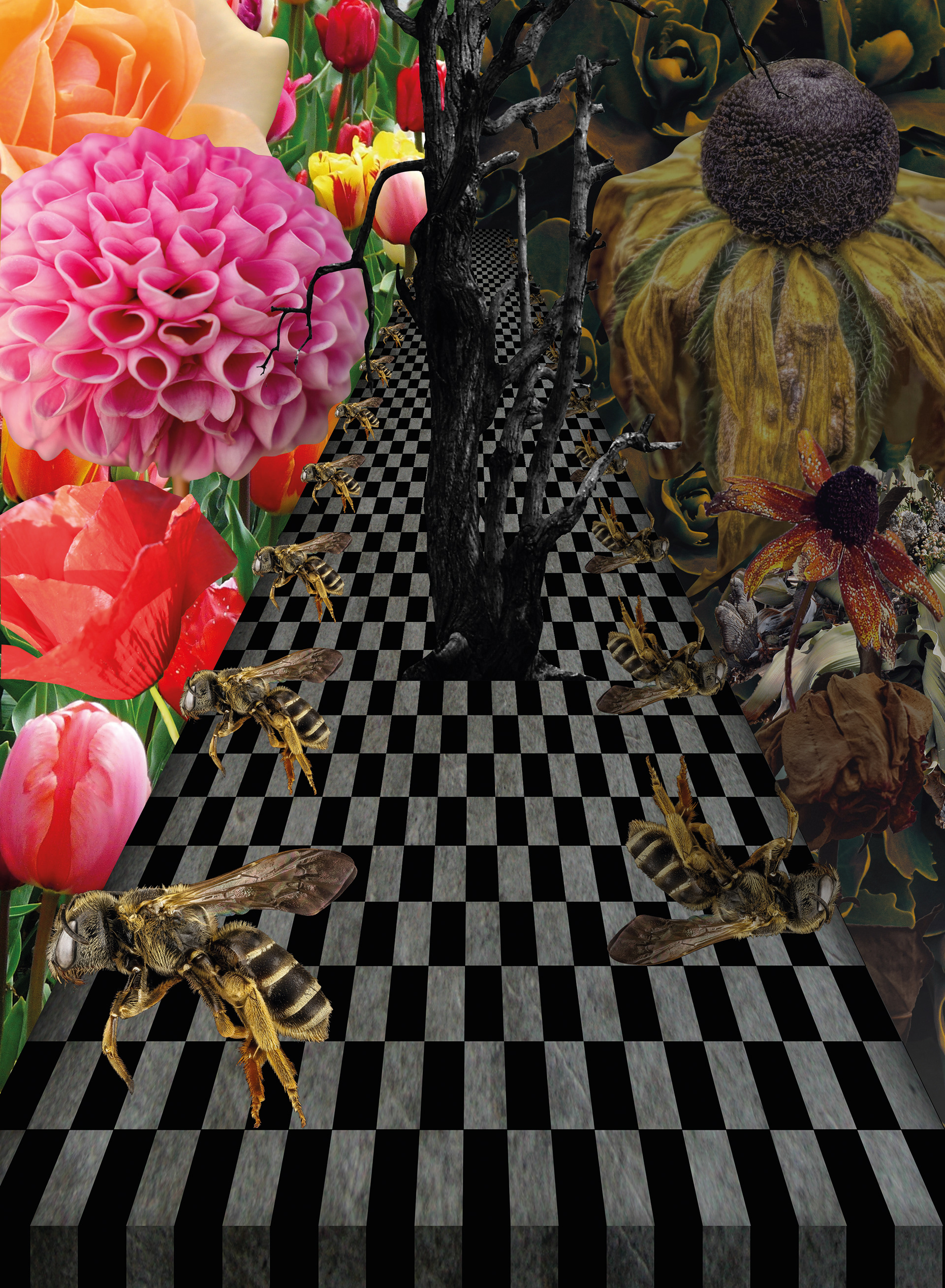 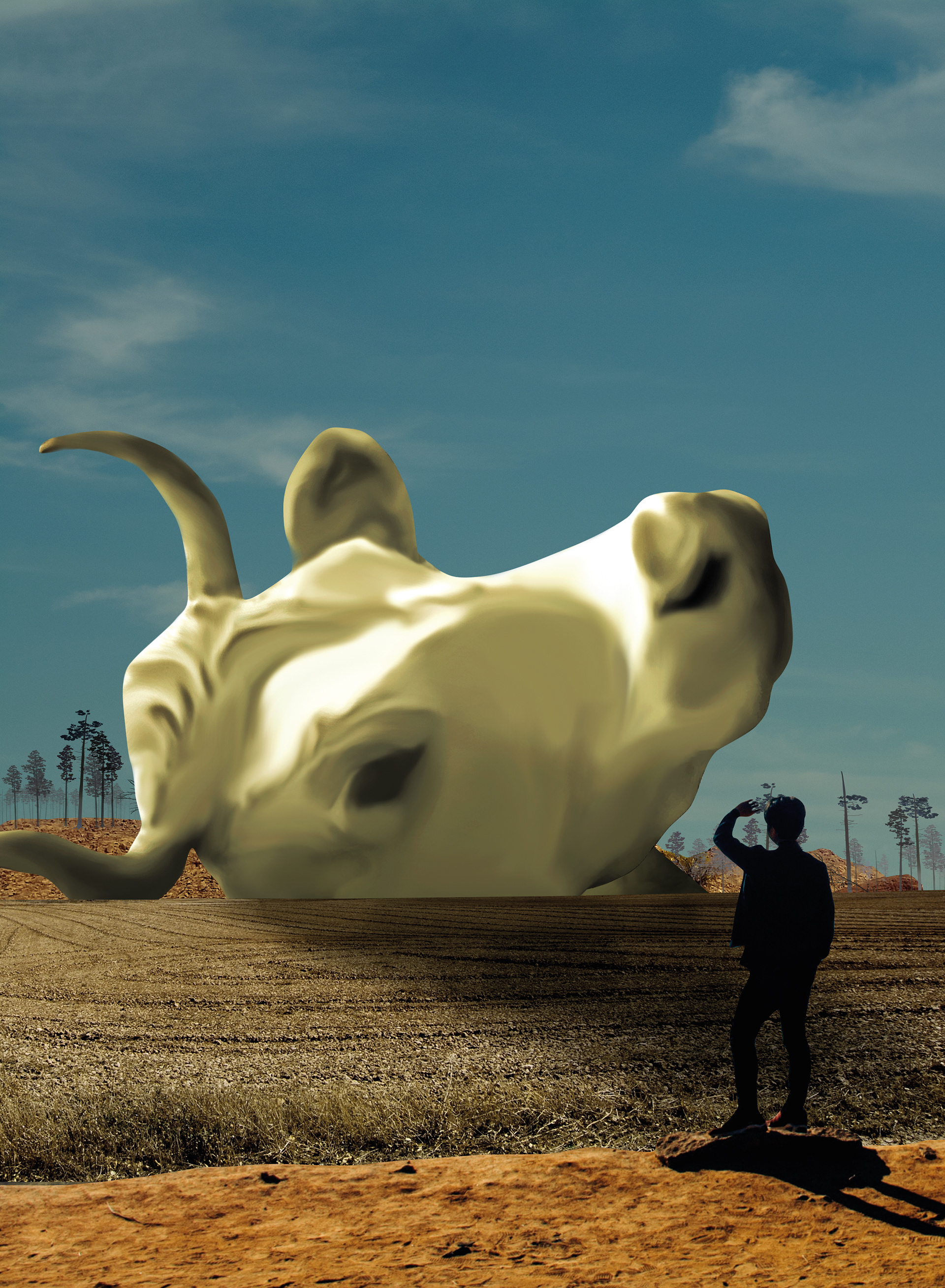 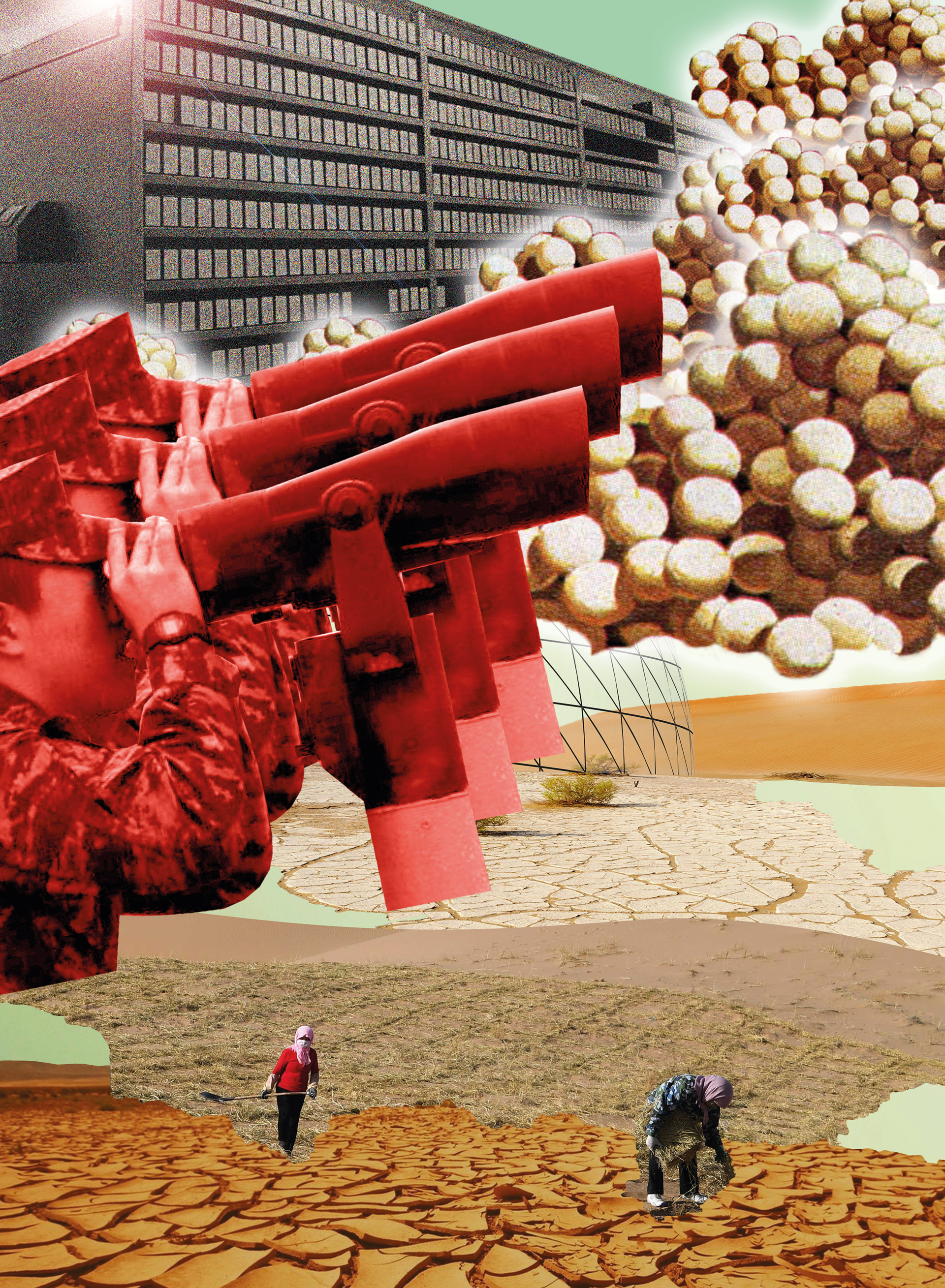 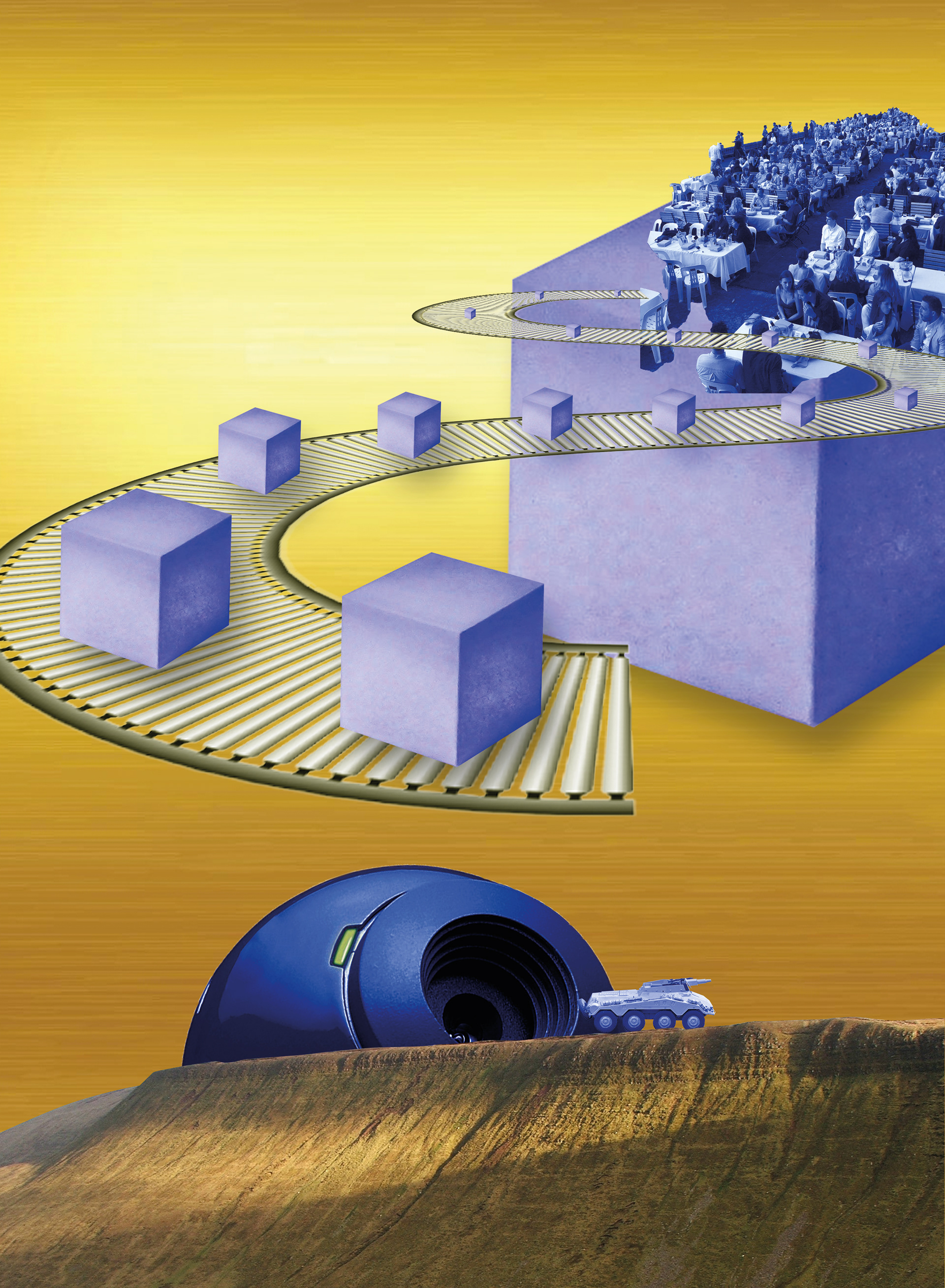 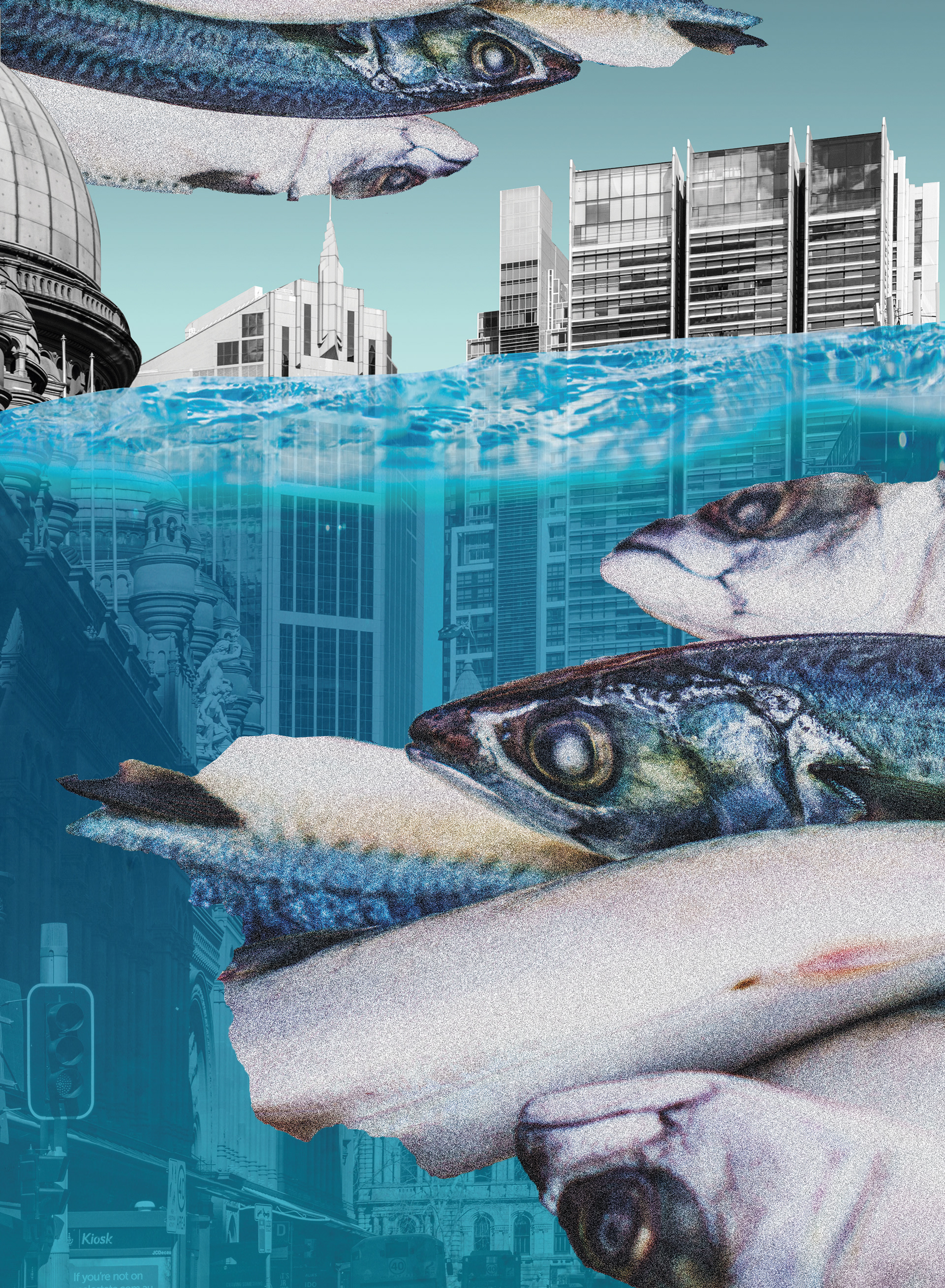 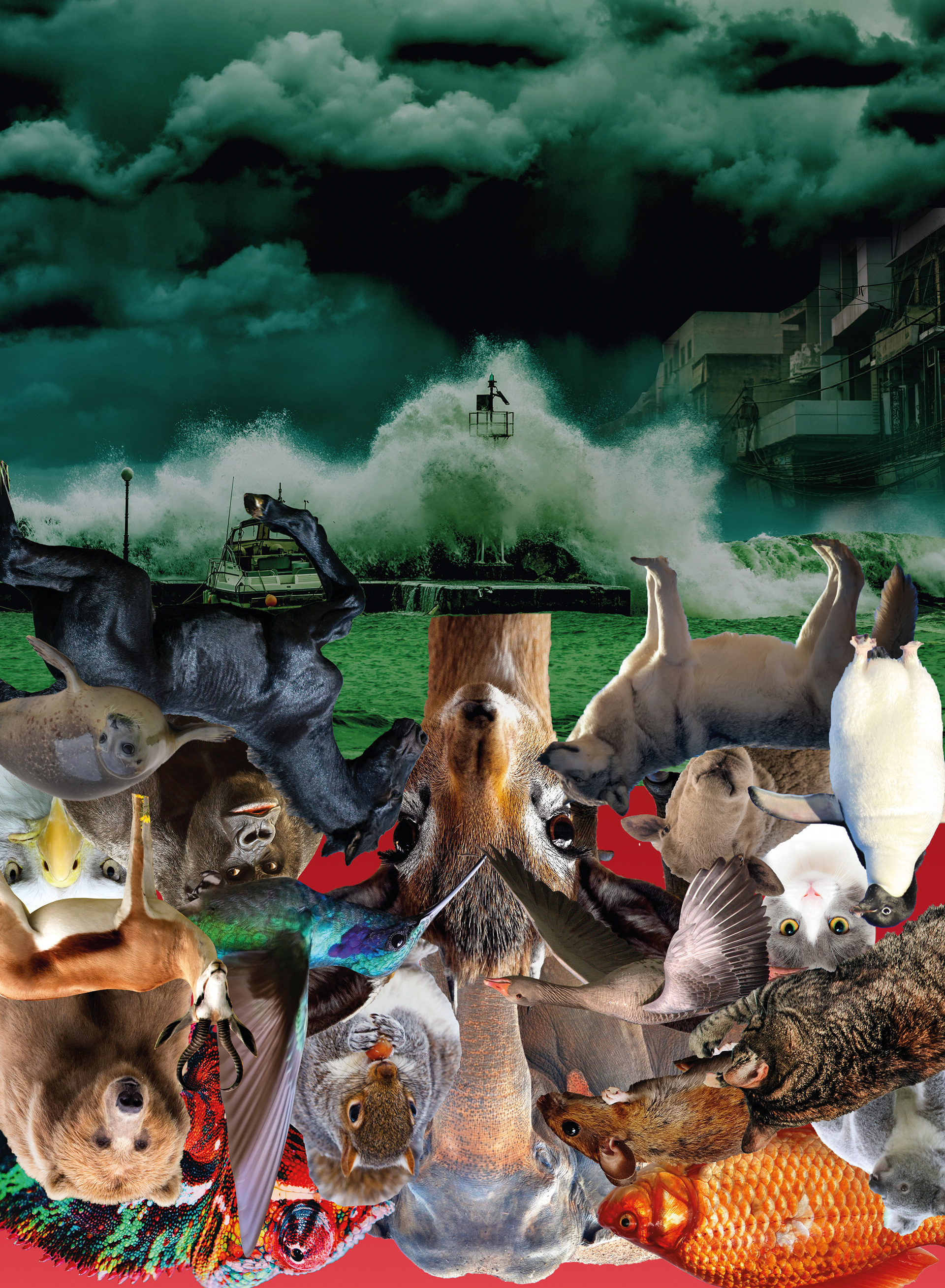 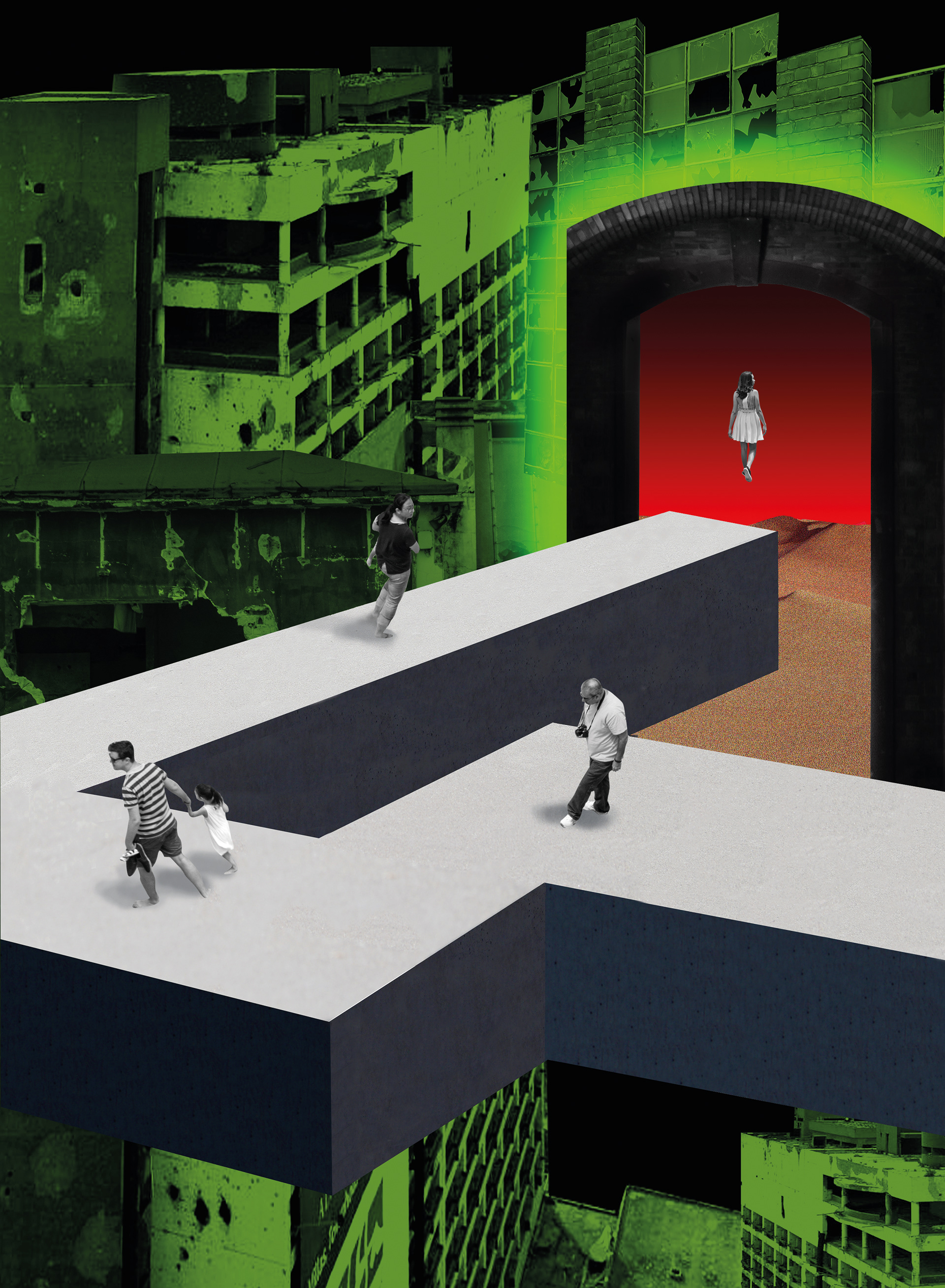 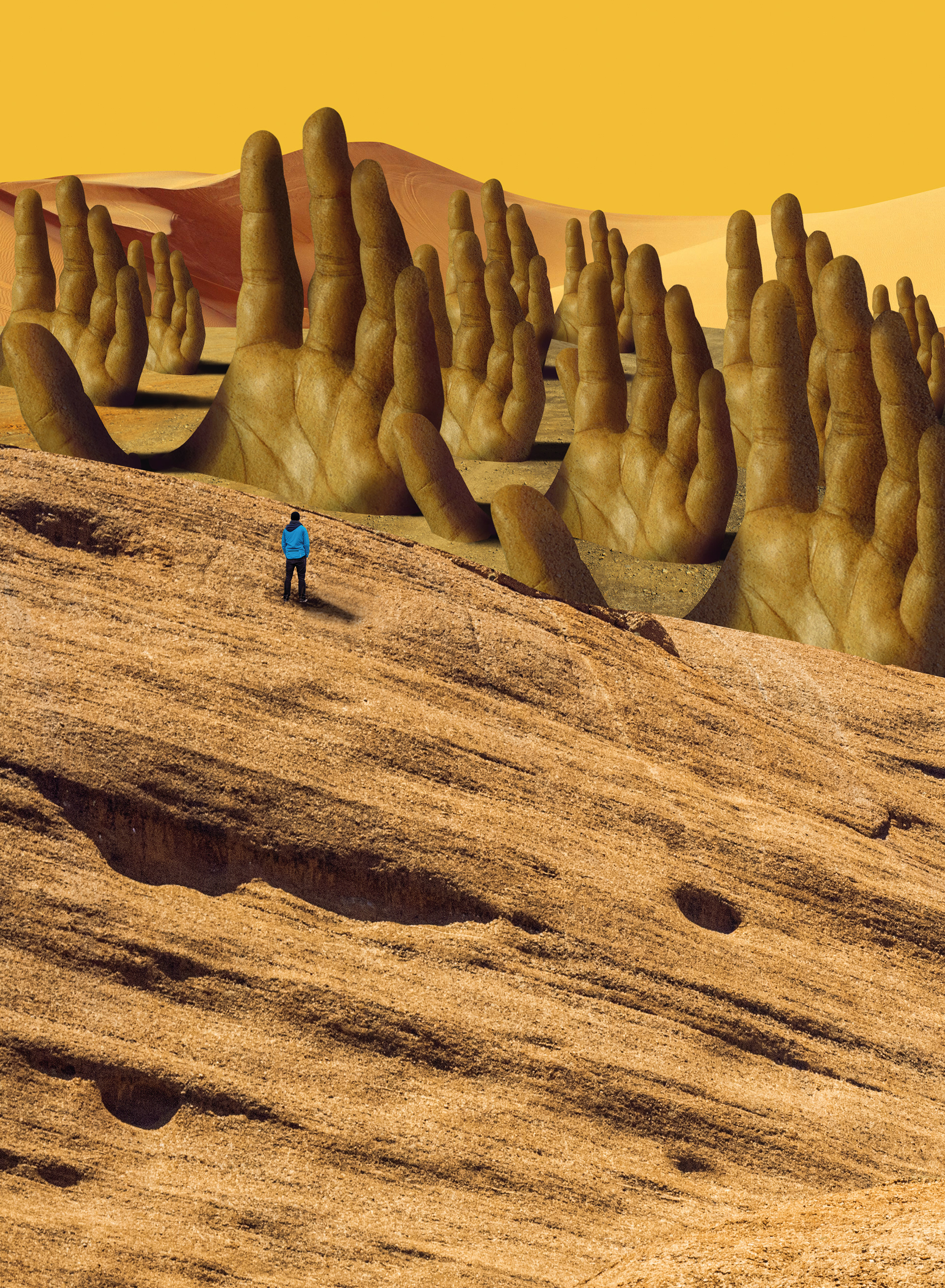 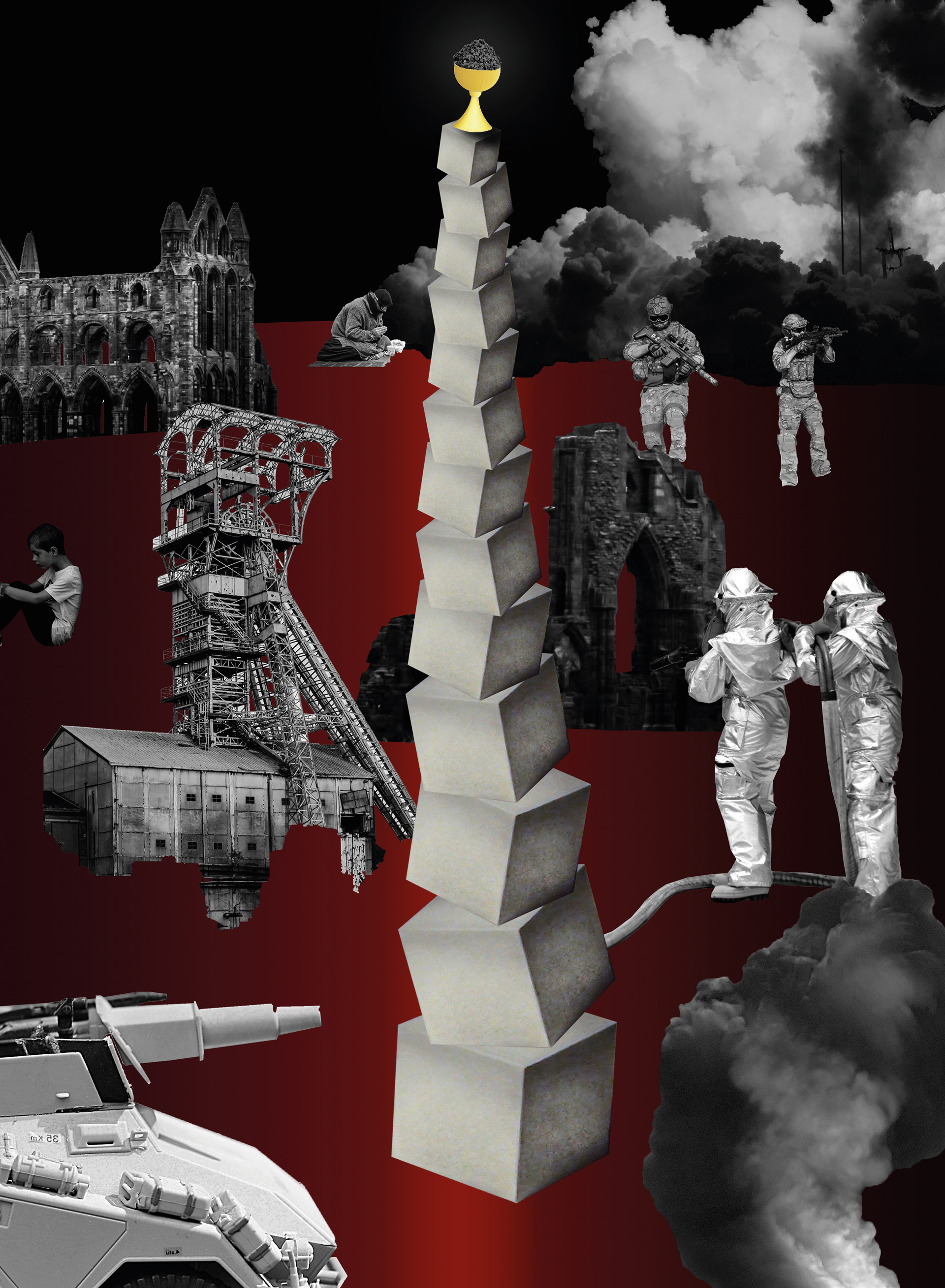 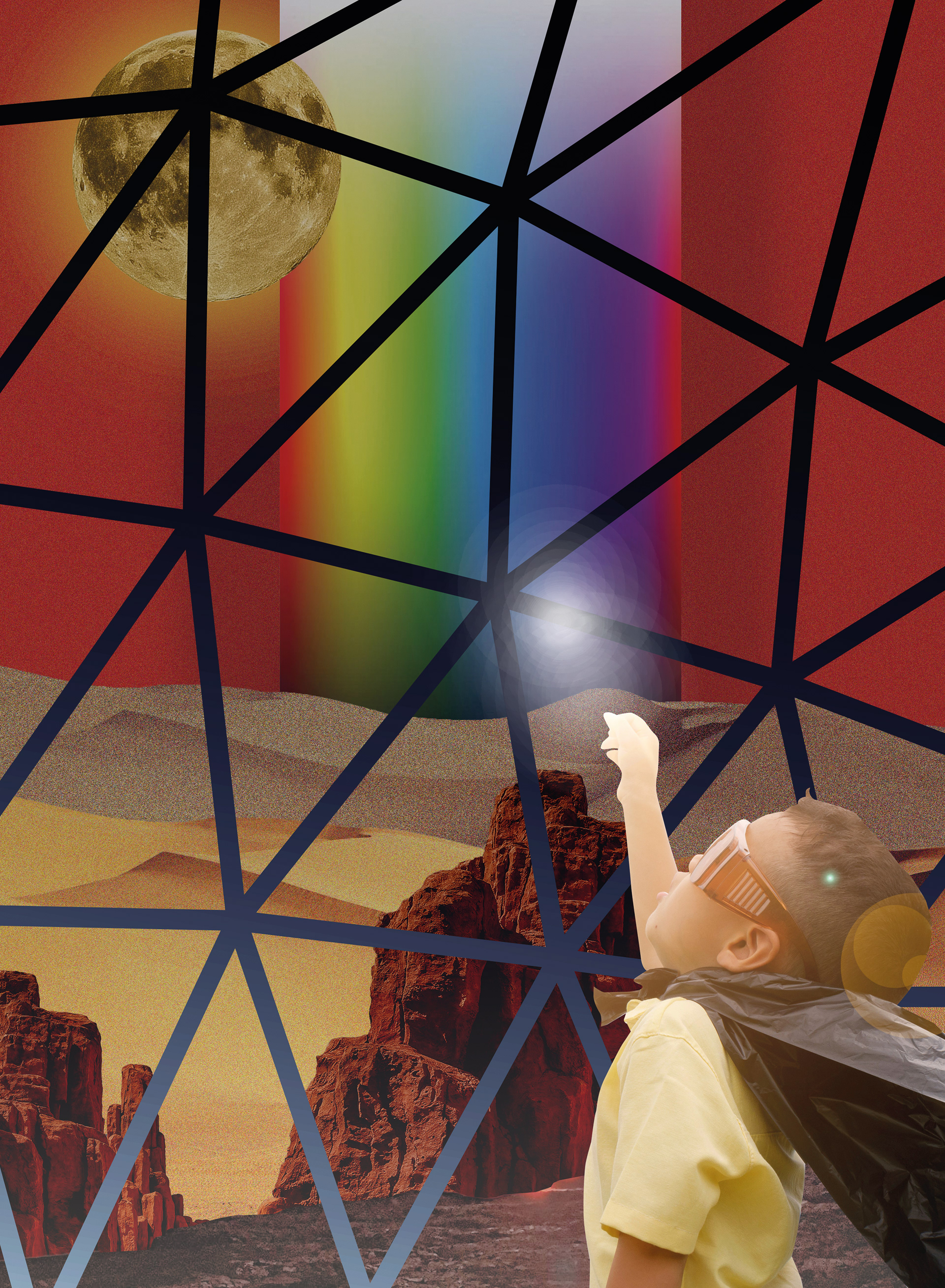 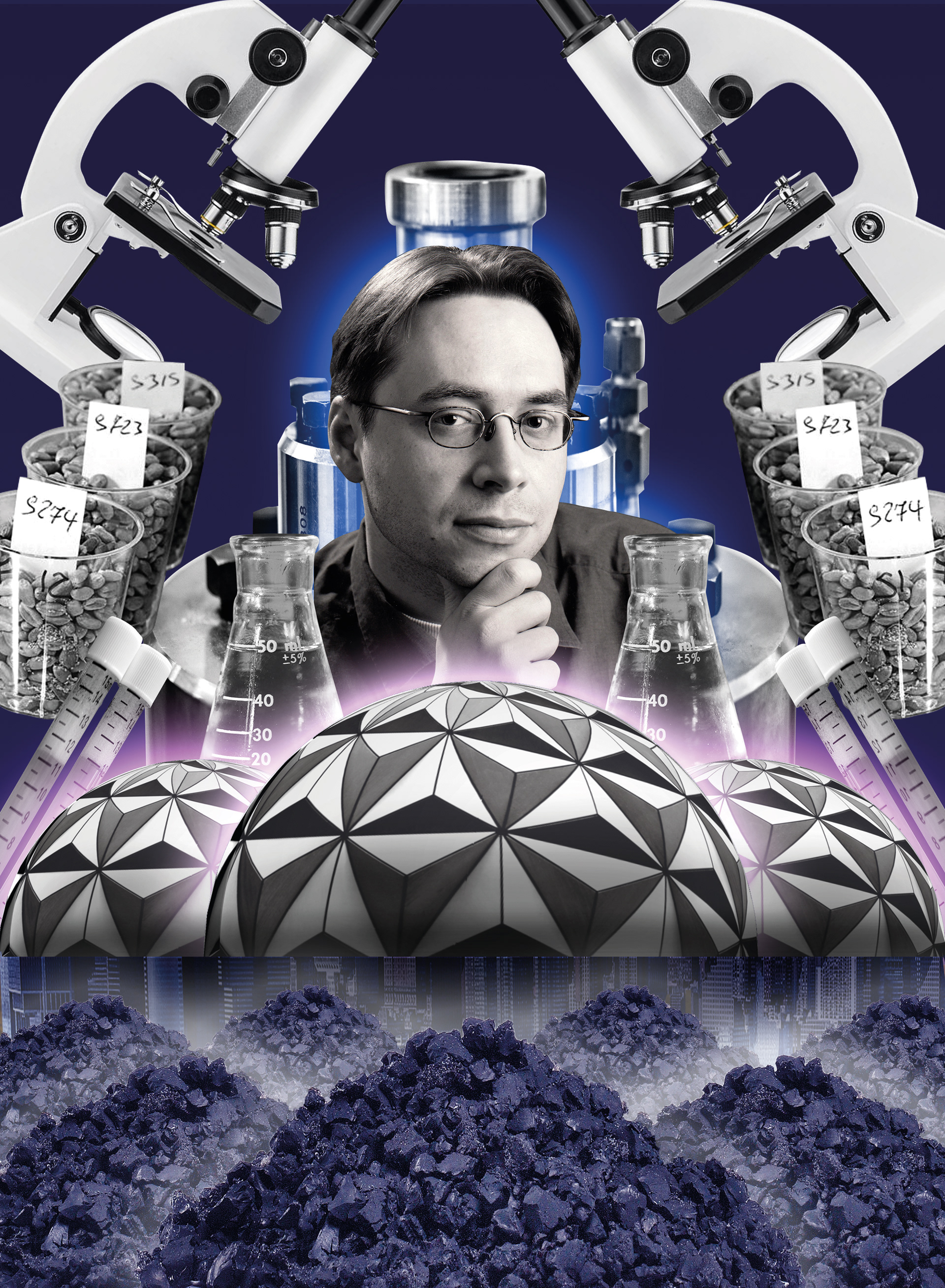 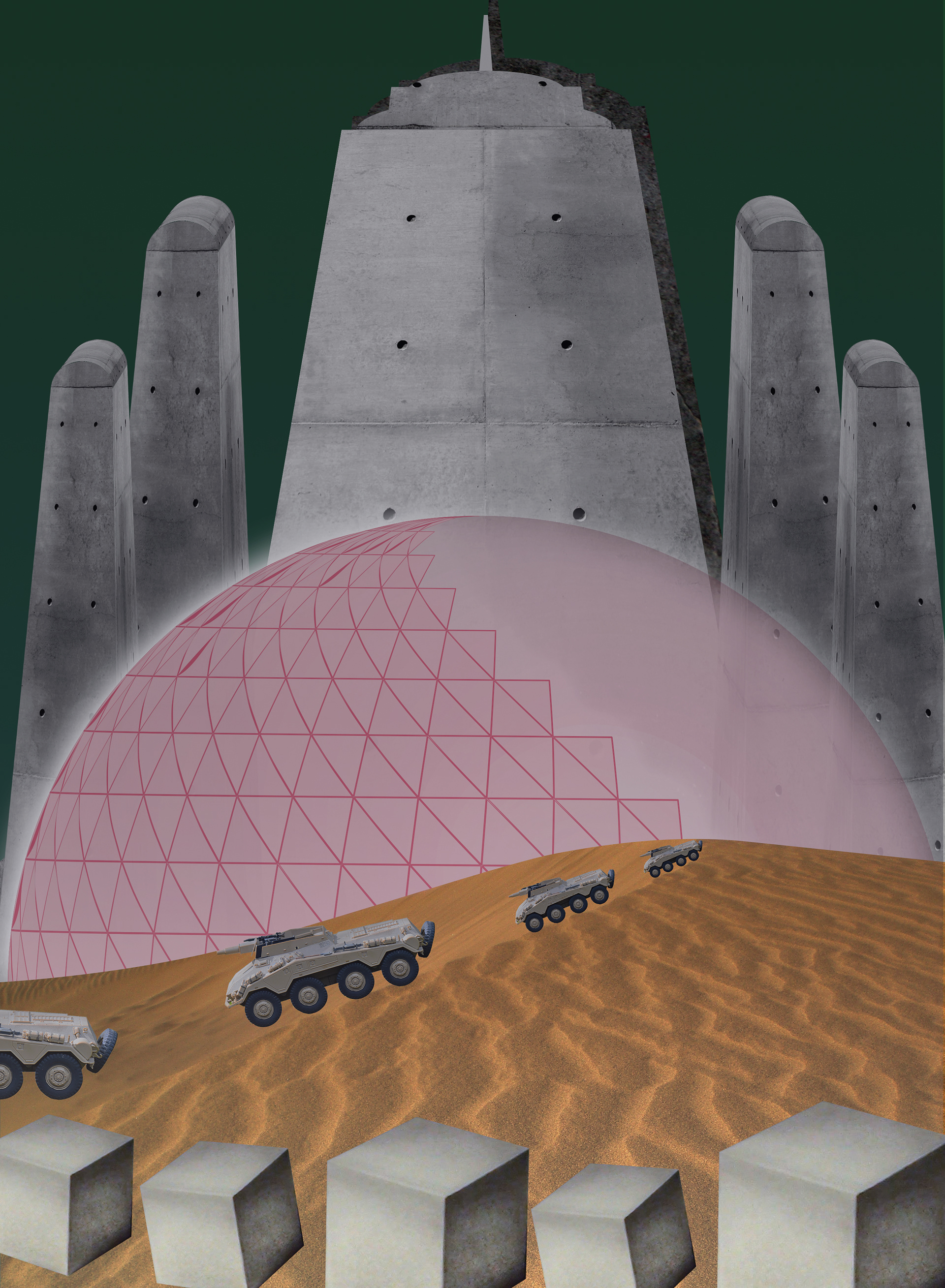 12 collages, describing the "last" 100 years of the Great Plant Extinction
1
The germ infestation
2018-2026
It started with a resistant germ that had infested fields and crops. He soon switched to robust ferns and grasses. In the end, all plants were affected.
Trees no longer thrived, plants did not develop properly and did not bloom. And so the plants became fewer and fewer each year, the landscape became barren.
Whatever man tried, he found no remedy for the germ, tried desperately to save remaining seeds that were not yet contaminated, and looked for solutions.
2
The death of animals
2027
Animals died with the plants. At first, the insects and herbivores succumbed to the effects of the germ, and carnivores followed only a little later.
There was no more food for farm animals and they were slaughtered, breeding ceased entirely, because the few plants that remained were needed by humans themselves.
3
The research biosphere
2028-2030
Large biospheres were built for the study of the germ and for the preservation of the remaining plants. Most of the money went into the development of alternative food.
Access was only possible under the strictest security measures, the germ was not allowed to be introduced and the last seed was also destroyed. The military ensured strict security.
The biosphere functioned as far as possible, but it could only be built in economically stable countries.
4
Military rule
2031
From then on, the military took over state security and rationed food. There were just too many people for too little food.
The economy functioned only to a limited extent, import and export were no longer important, the only thing that had to be done was to combat the problem of plant death. Research was soon only carried out in this regard.
Social life stagnated, the infrastructure began to crumble.
5
The climate change
since 2032
The loss of the forests had even worse consequences. The climate changed.
It became hotter, deserts formed up to the former polar zones. Severe natural disasters hit the earth, storms and floods caused devastating damage.
The polar caps melted and caused the sea level to rise by several meters. The coastal regions became uninhabitable, many cities had to be abandoned.
6
The devastation
2033-2034
The climate change brought bad devastation with which man could hardly assert himself.
The world had turned into a desert, and man was now the only living being; animals no longer existed.
The few plants in the biosphere were barely able to feed the remaining population.
7
Leaving the cities
2035-2036
Life in the cities became more drastic - crime, violence and hunger were the order of the day.
At research centers, residential biospheres have now been built underground, away from the heat and hostile surface.
Those who could afford it left the neglected cities. They moved their lives to the new biosphere cities. Here they were safe and cared for and protected by the military.
8
The poor countries die
ab 2036
The poor countries of the world lost the fight against the germ. Where they were already suffering from famines before the plants died, they now had no chance to assert themselves against this threat.
The western states were unable to raise funds for humanitarian aid because they fought bitterly for survival.
9
The granules
2037-2039
By converting chains of petroleum molecules, researchers developed a protein-rich granulate that could keep mankind alive and provide basic care.
From now on, the military distributed the vital granules to all people - both in the depopulated cities, which had meanwhile become marginalized, and in the new residential biosphere.
10
The new life
2040
From then on, the biosphere cities grew larger and adapted to the new conditions.
Society functioned within these new cities, where up to 1800 people could be cared for.
Life and work were devoted to research and the acquisition of new knowledge and the striving for a harmonious coexistence in the new world.
11
The new food
2059-2067
After long research, the scientist Robert E. Fassbender succeeded in revolutionizing the monotonous granulate food, which was considered impossible for a long time.
On the basis of the granulate, he developed a malleable food called SynthNutri, which could be used for everything that people need.
With the establishment of SynthNutri Laboratories, he pursued the vision of bringing this new food to the whole western world.
12
The Group
2068-2118
So people got to know tastes again after years and experienced food as something beautiful and tangible, not something that only serves to survive.
From then on, SynthNutri Laboratories ensured worldwide distribution to all biosphere cities around the world, and developed SynthNutri a food that brought people confidence and contentment.
Bachelor-Thesis 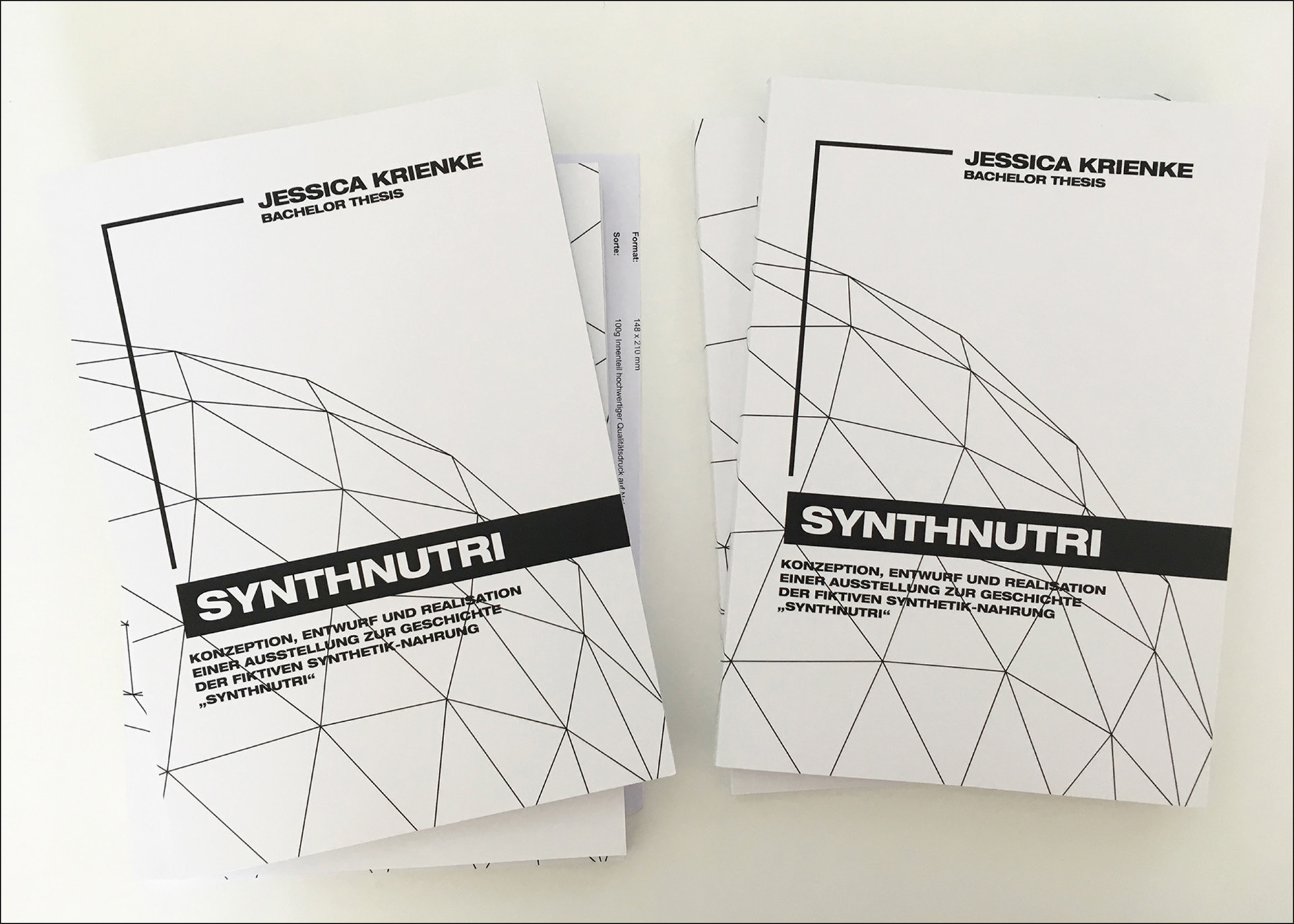 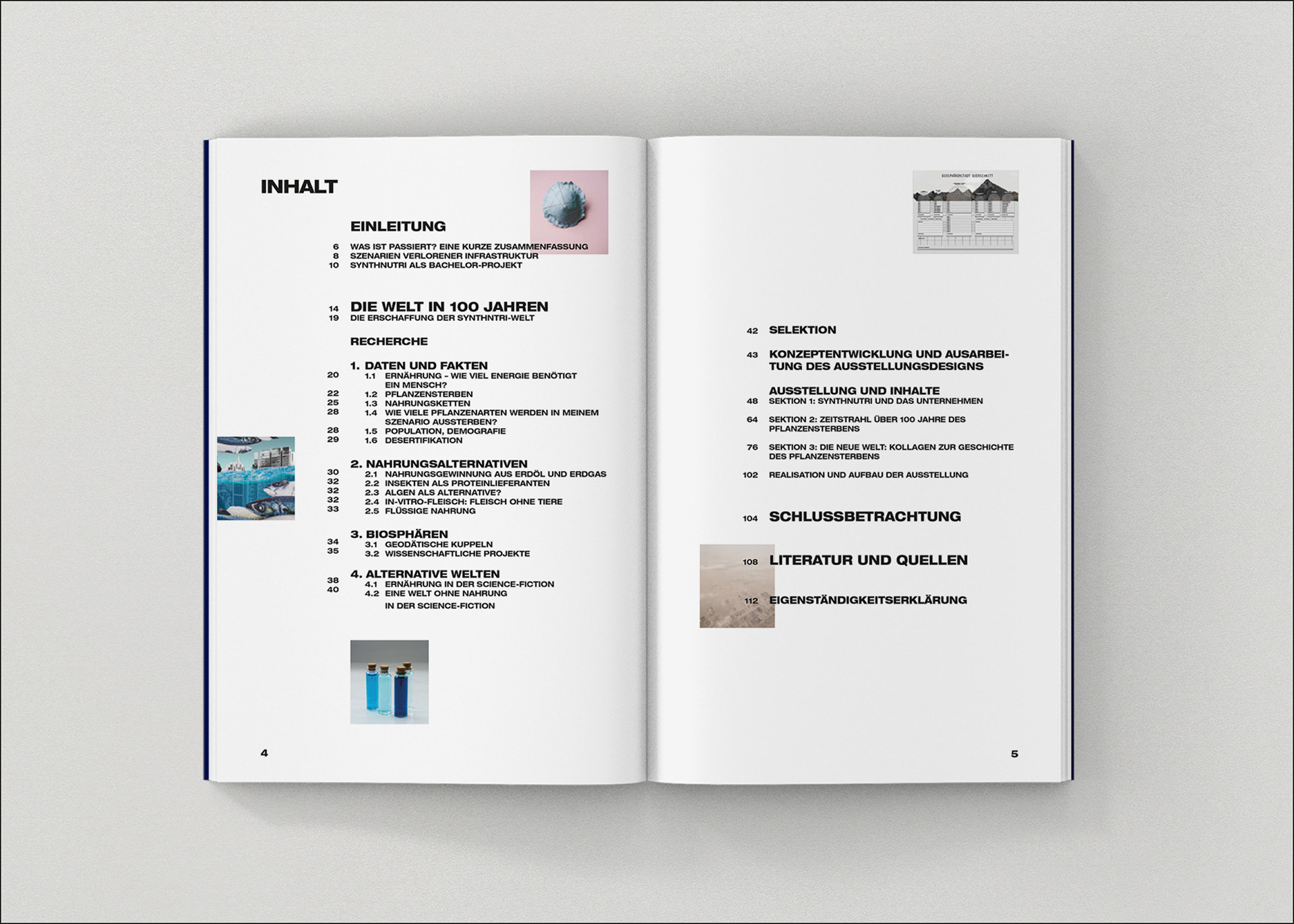 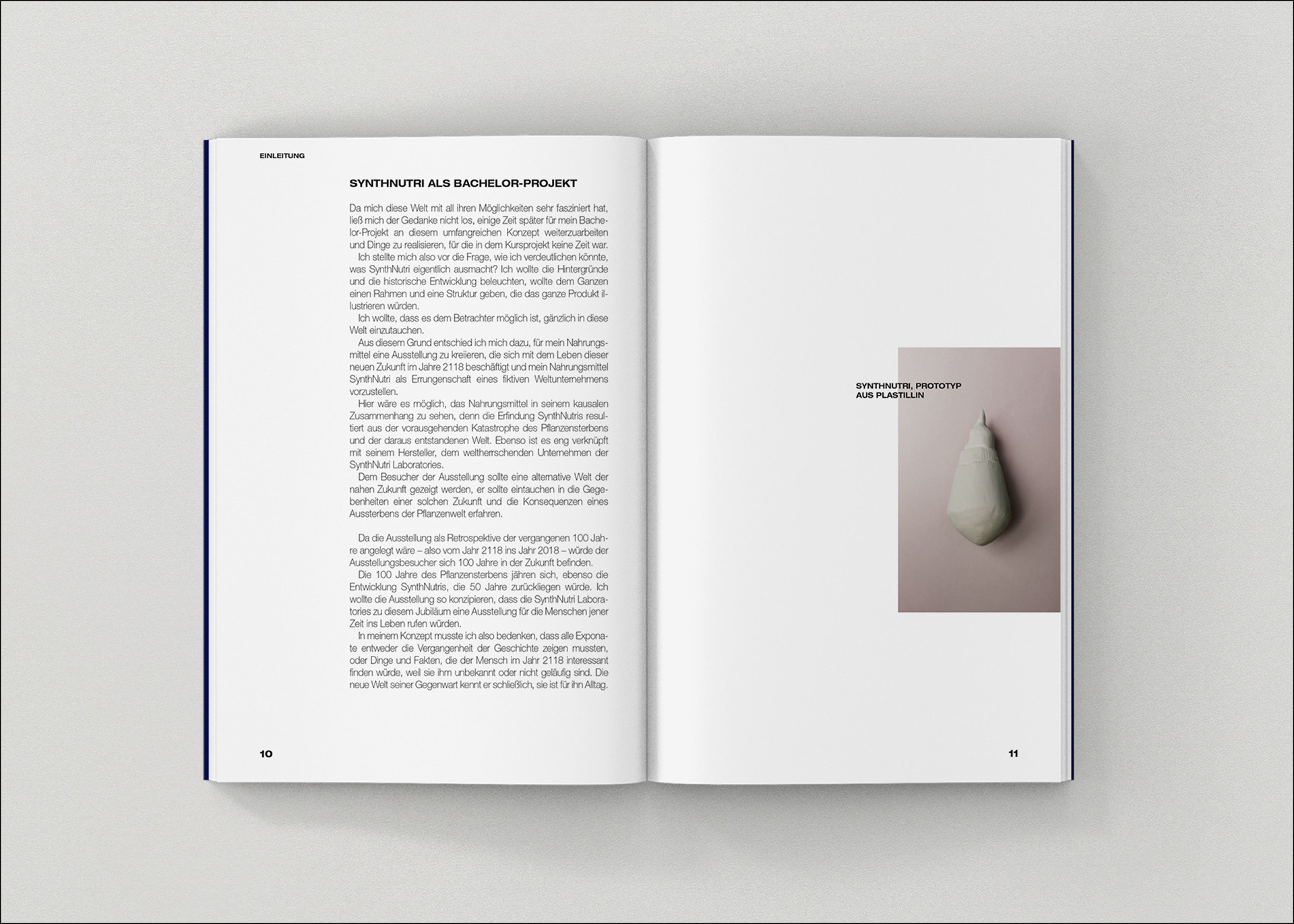 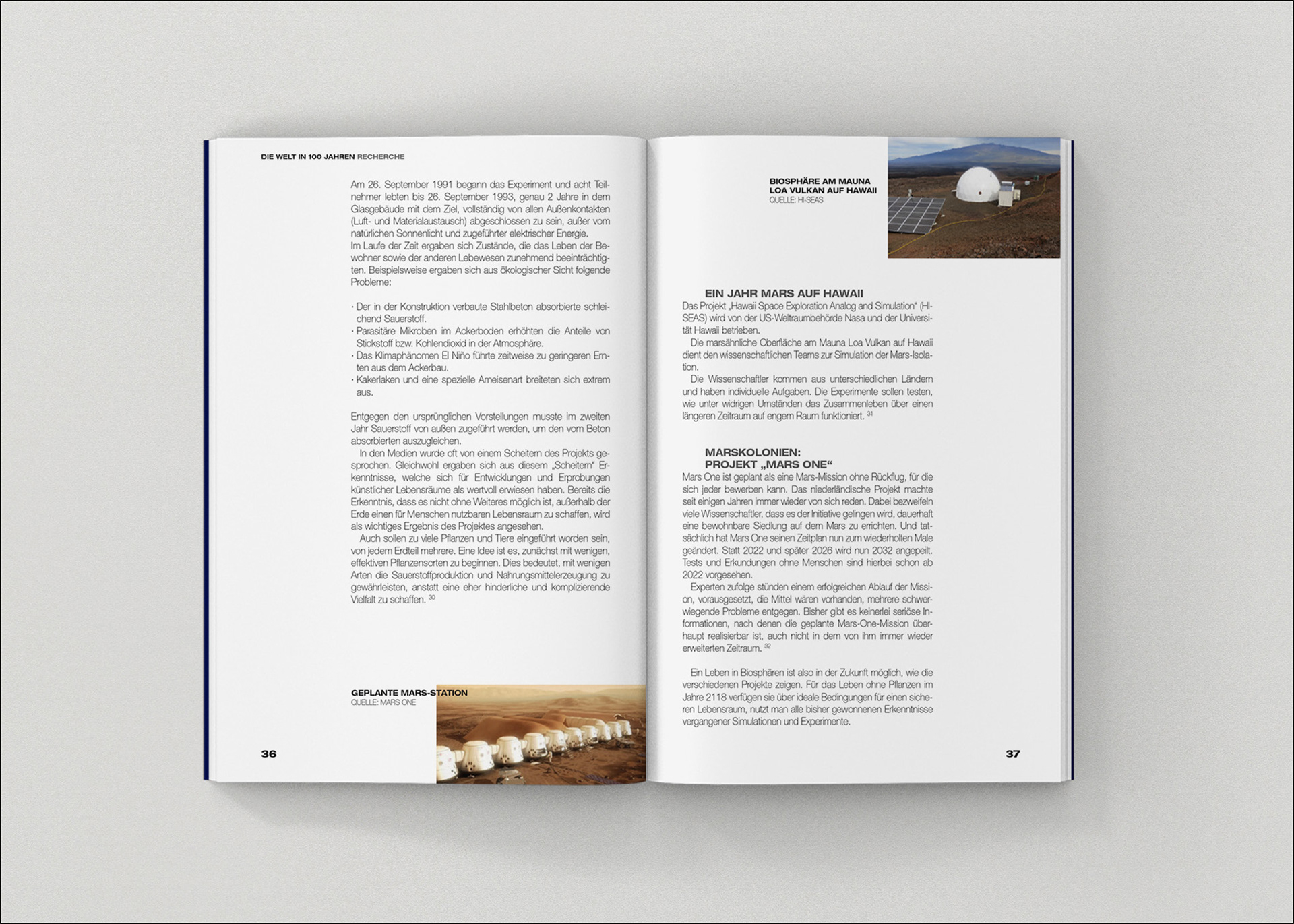 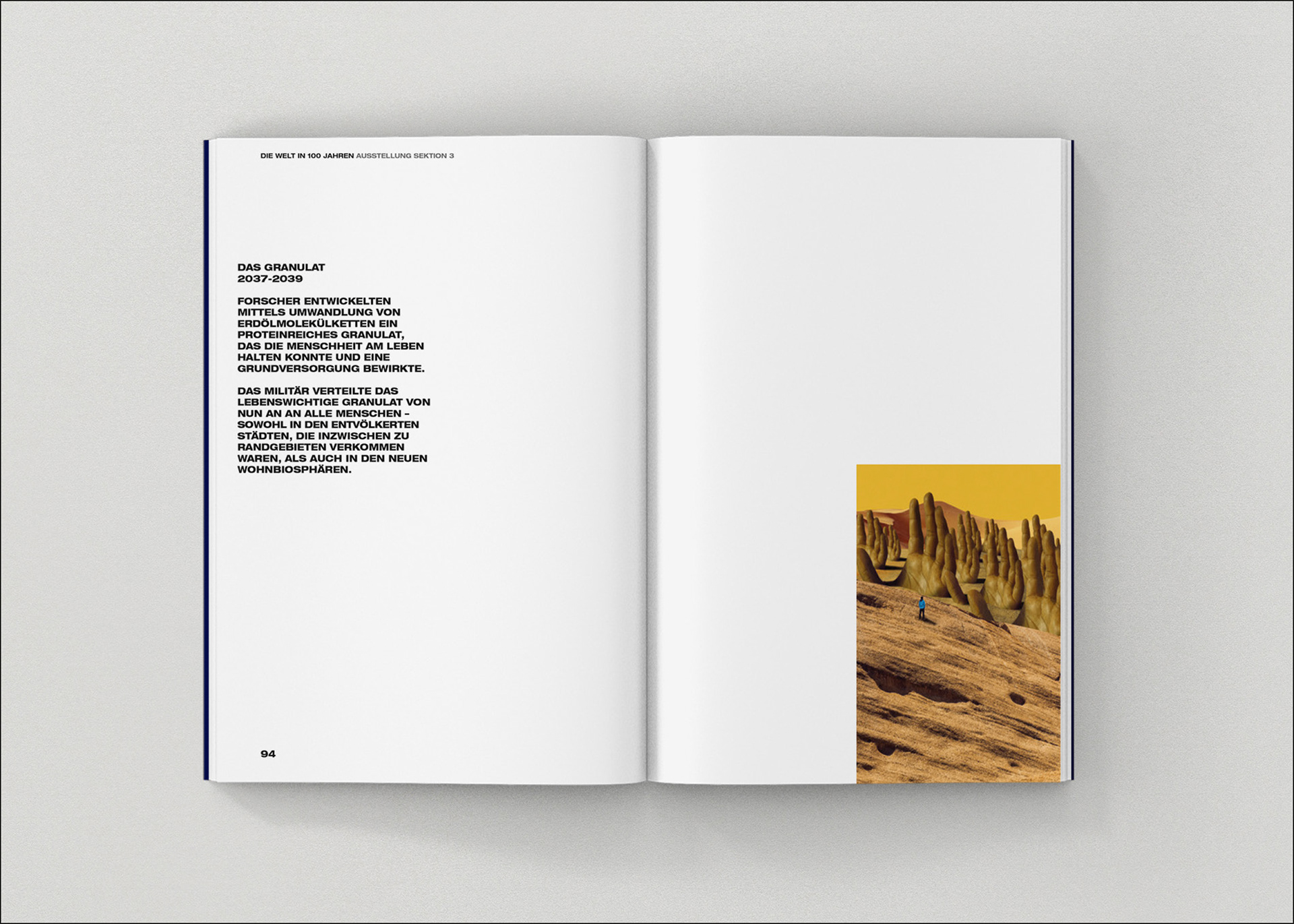